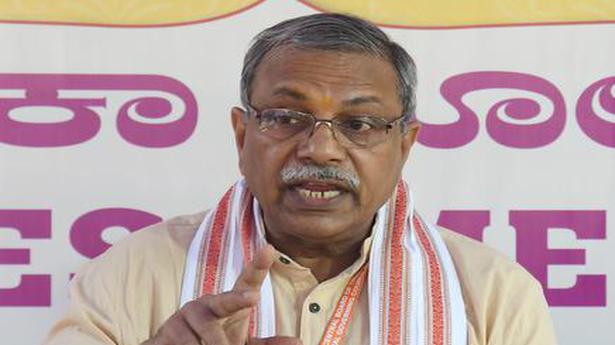 Vishwa Hindu Parishad on Sunday called for a central law against forced religious conversion. Addressing a press conference in Meerut, Surendra Jain, the international joint secretary general of Parishad, thanked Uttar Pradesh Chief Minister Yogi Adityanath for passing a strong law against forced conversion in the State. “But recent events in the Loni area of ​​Ghaziabad have proven that this is a pan-Indian racketeering and therefore requires central law.”

Adding that they would raise the demand with the Union Home Minister, Jain said those involved in the conversion activities also engage in the spread of terrorism and therefore demanded a strong central law.

He alleged that the so-called secular parties support such activities. “When a private member’s bill against forced conversion was presented to the Chhattisgarh assembly, it was rejected by members of Congress,” he said.

Calling for a “saffron revolution” in the region, Jain also said the VHP and Bajrang Dal had identified 70 hotspots in western Uttar Pradesh from where Hindus were seeking a mass exodus out of fear. “We will develop the self-confidence of Hindus who live in areas where they are in the minority,” he said, referring to a recent incident in Moradabad where around 80 Hindu families allegedly put up posters stating that their homes were on sale because they were harassed by Muslim neighbors. Local police, however, had debunked the theory.

In “Palayan nahin Parakram” (Courage not the exodus), he said, the VHP gave a new motivational song to Hindus in western UP. “It was decided that each village will have a Bajrang Dal Akhara and a Durga Vahini center. And we believe the region will get rid of the “mini-Pakistan” label.

He called on Muslims to come out of the “pre-1947 state of mind” and believe in “peaceful coexistence”.