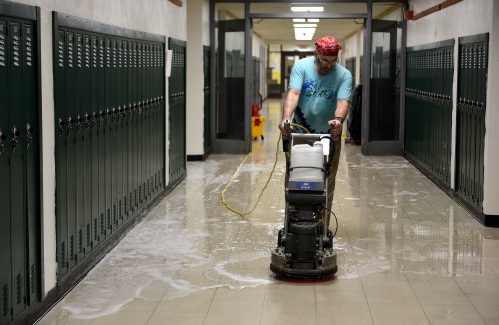 WOODSTOCK — Plagued by failing infrastructure and a heating system that dates back to the 1950s, school officials have begun raising private funds to help pay for the planned $80 million construction of a new building net-zero energy high school and college building in Woodstock.

The project has already received two anonymous pledges, one for $1.5 million and another for $125,000, said Windsor Central Supervisory Union chief financial officer Jim Fenn. To fully fund construction, residents of all towns in the district must vote to approve a bond measure. This would likely happen in 2024, either at the March town meeting or by special vote.

Each member town in the district – which includes Woodstock, Barnard, Bridgewater, Pomfret, Reading, Killington and Plymouth – would see an equal increase in their property tax rates if the school bond is approved by voters. Tuition increases for schools in the district, the rates of which will be decided by the school board, would also help pay for the new building.

Schools account for about 11% of energy consumption of American buildingsand Woodstock Union’s steam heating system, which runs on oil, contributes to the 1.8 million pounds of carbon dioxide emitted annually by the current building.

“School buildings are your main suspects in terms of environmental impact because they’re so big and often quite old,” Ford said.

A net-zero high school and college would mean that the energy created on-site, presumably through solar panels, would account for the total amount of energy used annually in the building. The proposed project is inspired by the school’s neighbor: Union Arena is the nation’s first net-zero indoor ice rink.

Deliberations dragged on for years as school officials and taxpayers considered the high construction costs of a new building, and prices continued to rise amid pandemic shortages and inflation. Windsor Central concluded a two-year study of the condition of the buildings in 2019 recommending a total renovation. An index measuring a building’s depleted value ranked Woodstock Union Middle and High School — which serves about 570 students — as having the second-worst facility condition score in the state, according to a report from the Vermont Agency of Education. .

Ruined infrastructure has its own price. The last school year saw $150,000 in emergency repairs to the high school’s HVAC system, and several classrooms fell out of service due to heating issues. Old windows, leaky doors, and a sprawl of a floor mean the broken down steam heating system has to work harder to do its job, further hampering energy efficiency.

As the school prepares to publicly launch its fundraiser and navigate another heating season, Leigh Sherwood is in the early stages of designing a new kind of energy system.

Sherwood, who works for the Lavallee Brensinger firm from its office in Manchester, NH, was hired to design the building and has a history in sustainable school architecture. It is important that structures are built with energy efficiency in mind, he said.

In the case of Sherwood’s design for Woodstock, this would be achieved through a new two-storey building, facing the sun to maximize solar energy harvesting and natural lighting.

“We know that if we take all of this into account up front, we’ll get better energy results later on,” Sherwood said in a phone interview. “And we won’t have to throw in a bunch of bells and whistles and fancy tech later.”

To move away from carbon-based energy sources such as oil and gas, the proposed building would generate its own electricity on site, which could power an electric heating system such as a heat pump.

Vanessa Cramer taught environmental science and biology at Woodstock Union High School for 10 years. She sees sustainable design as in line with the school’s values ​​and the new building as an educational tool for the possibilities of becoming net zero.

“We have a ton of students who are interested in environmental science and passionate about the planet,” Cramer said. “They recognize how inefficient we are and how much energy we use, how much better the building could be.”

It’s hard on his students, who are distracted by temperature variations. At this point, they are used to bringing layers of clothing to school with them.

Joe Rigoli, director of buildings and grounds for the school district, described the existing steam heating system as “very fragile” and difficult to repair. “No one really knows how to work on such old boilers anymore,” he said.

Rigoli is taking advantage of the summer months to tune the system and is looking at another winter of working seven days a week to make it work.

“Hopefully we can be successful again,” Rigoli said.