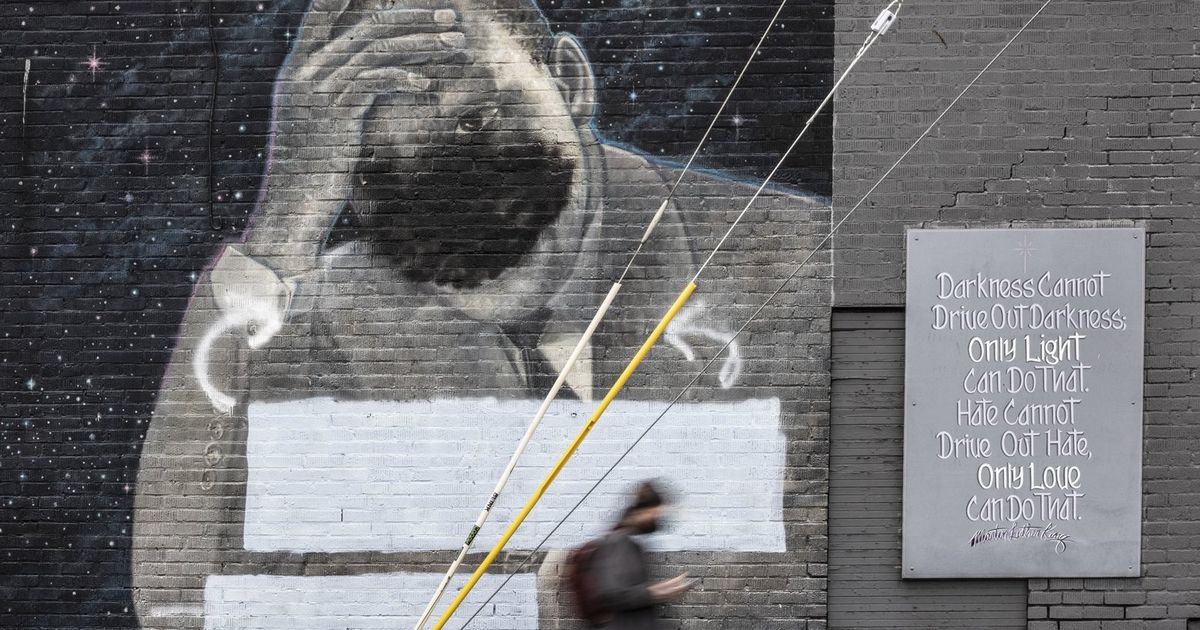 The MLK mural on the Central District restaurant has been defaced, but plans are in place to restore it

Erika White hadn’t planned to visit her Central District restaurant on Martin Luther King Jr. Day, as the business is usually closed on Mondays. But when a technician said he was free to fix the radiator at Fat’s Chicken & Waffles, she went to meet him, only to find King’s mural on his restaurant had been defaced.

“It felt like someone punched me in the stomach,” White said Thursday. “I’m completely shocked anyone even had the nerve to do that.”

The previous night, his staff had finished a long and busy day and White and friend and employee Erika Kidd had taken a selfie in front of the mural to pay homage to him. The 26-year-old mural has long been a source of encouragement for White as she keeps her Southern cuisine restaurant afloat.

After discovering the vandalism, White called a friend who covered up the offending post. Kidd posted a photo of the vandalism on Instagram. When the restaurant opened on Wednesday, calls and social media posts poured in from people expressing support and seeking to donate for the restoration of the mural.

“No one deserves to have a beautiful piece of art based on a beautiful human to be degraded in this way. It doesn’t matter what your opinions are,” Kidd said.

Ironically, King 5 TV had pre-recorded a segment about the mural and the significance of White’s Restaurant, a black and women-owned business, in the gentrifying Central District in preparation for MLK Day, White said.

The vandalism caught the attention of Seattle Mayor Bruce Harrell, who said in a statement that the Seattle Office of Arts and Culture would help clean up the mess.

“This act of vandalism is totally unacceptable and violates our city’s core values,” tweeted Harrell, who grew up in the Central District. “…We will not allow inflammatory actions to derail our vision of a welcoming Seattle.”

Office of Arts and Culture spokeswoman Erika Lindsay said more information on how the city will contribute to the restoration will be released at a later date.

White also said she spoke to a bias crimes investigator from the Seattle Police Department, which is investigating the incident.

The vandalism recalled a similar incident in 2020, when a mural created by students at Franklin High School and to honor the Seattle chapter of the Black Panther Party was defaced.

White said she was not speculating who vandalized the MLK mural or why. She says she is focused on finding a way to get James Crespinel, the artist who painted the mural, back to Seattle to restore it. Crespinel is based in West Seattle and Zihuatanejo, Mexico.

Crespinel told the South Seattle Emerald he’s ready to restore the mural, but it might take a few weeks to arrange a trip to Seattle.

The mural has long been a fixture of the neighborhood, said White, who grew up in the Central District and attended Garfield High School.

White had the mural retouched by Crespinel in 2015, when his restaurant opened. The people, protective of the mural, made sure White was aware of what was going on.

“Even though the faces and the people have changed, it’s still a community mural,” she said.

To donate to the restoration of the mural, contact White at: ewhite@fatschickenandwaffles.com.

Correction: An early version of this story misidentified the installation location of artist James Crespinel. He is based in West Seattle and Zihuatanejo, Mexico.