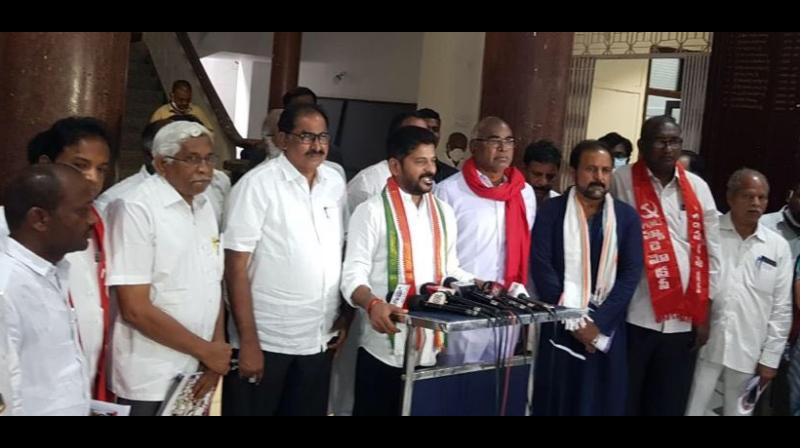 HYDERABAD: Led by Congress, all opposition parties in Telangana have decided to fight united against the anti-farm policies of the BJP government in the Center and the Telangana Rashtra Samiti (TRS) government in the state. Opposition parties have also decided to launch a series of agitation programs on topics relating to tribal lands, land acquisitions and the Dharani portal.

Speaking to reporters after the meeting, Revanth Reddy informed that a multi-party maha dharna on farmers’ issues would be held at Indira Park on September 22. He urged farmers and others to make Maha Dharna a big success.

Revanth Reddy said committees would be formed at the parliamentary constituency level to ensure the great success of the proposed Bharat Bandh on September 27. He said all political parties would work together to make Bharat Bandh more effective. Prominent leaders would lead the protest on the national highways connecting Hyderabad. He said activists and leaders of all opposition parties in each constituency are expected to be on the road on September 27 to register their protest. He also called on the people to participate in Bharat Bandh.

The TPCC chairman said delegations from all parties would submit joint representations to district collectors on September 30 to seek redress for the problems faced by farmers. On October 5, agitation programs would be organized with regard to the Podu lands in the 400 km connecting corridor. A “Podu Rasta Roko” from Adilabad to Aswaraopet will also be organized.

Revanth Reddy said tribal communities have cultivated forest land for decades in 20 Assembly constituencies. However, these tribes did not receive any pattas for these lands. He blamed Chief Minister K. Chandrashekar Rao for increasing incidents of clashes between tribes and forestry department staff. He said the TRS government had failed to resolve forest land disputes despite several assurances.

Veerabhadram said opposition parties will continue their struggle until all claims are resolved. Chada Venkat Reddy said that up to 19 political parties nationwide have joined together under the leadership of Congress President Sonia Gandhi to launch a joint agitation on farmers’ issues. He said CPI workers would actively work with other parties to ensure the success of the proposed agitation programs.

Kodandaram called on the people to support the opposition parties’ maha dharna on September 22, Bharat Bandh on September 27 and other programs. He said everyone must support the agitation to protect the rights of Podu farmers.

Rangarao said the Modi and KCR governments have overlooked the issues that ordinary people face. Therefore, the unrest was the only way to pressure the government to address issues affecting farmers and other sections of society. The meeting was also attended by TPCC Vice Presidents Mallu Ravi, Vem Narender Reddy, Kisan Congress National Vice President Mr. Kodanda Reddy, Prof. PL ​​Vishveshwar Rao, K. Rama and others.