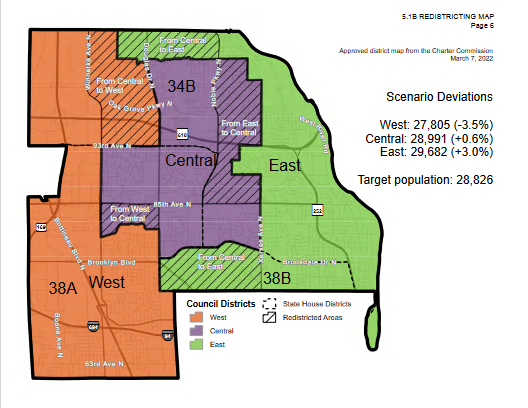 This week, the Brooklyn Park City Council adjusted district lines to accommodate the growing Central District and comply with redistricting requirements. Cities that elect council members by wards must be redistricted within 60 days of the redistricting of the legislature or at least 19 weeks before the primary election in the year ending in two, whichever comes first.

Census figures revealed that Brooklyn Park has grown over the past 10 years, with the greatest growth in the central part of the city and north along the freeway. 610. The proposed new lines will leave a more compact central district.

The number of precincts in the city will also increase from 24 to 25. Along with the newly redesigned districts, there will be five new polling places: Crest View Elementary, Zanewood Recreation Center, Brooklyn Middle School, North View Middle School and Grace Fellowship Church. City documents indicate that these locations have been polling places in previous elections. You can read the full resolution here.

The Brooklyn Park City Council approved the first reading of the ordinance, and the second is scheduled for March 28.

Nominations for the 2022 elections open on May 17.