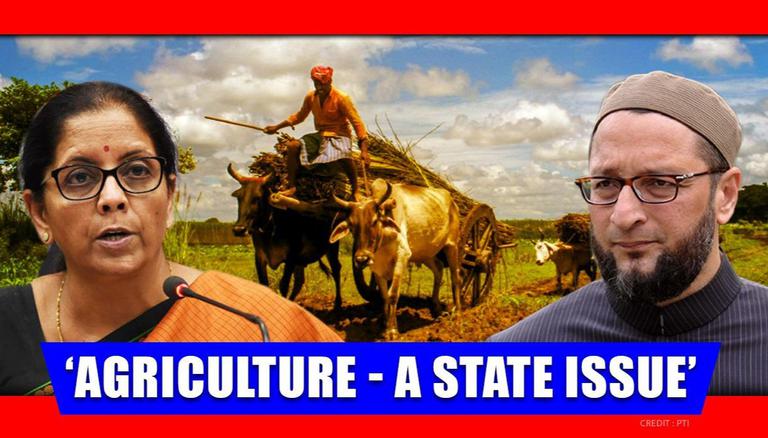 Criticizing the Centre’s third economic tranche announced on Friday and focused on agriculture, AIMIM chief Asaduddin Owaisi said agriculture was a state subject under the constitution. Opposing the central law allowing farmers to sell directly to the market, he alleged that the Center used interstate commerce as an excuse to encroach on the exclusive powers of the state. Passing a central law could diminish the legislative and administrative powers of states relative to the powers of the Center, Owaisi warned of the government’s overbreadth.

The center deploys 11 measures for farmers, fishermen and animals in the third economic tranche

Agriculture is subject to the state under the Constitution, a central law will be unconstitutional. You cannot use interstate commerce as an excuse to infringe on the exclusive powers of the state. Otherwise, there will be no point in having legislative and administrative powers separate from the states. https://t.co/EHISLfsAHL

Regarding governance measures, the Center announced that it would amend the Essential Commodities Act which was enacted in 1955 to allow better price realization for farmers by attracting investment – making the agricultural sector competitive. It will also include agricultural marketing reforms to provide marketing choices to farmers through a central law to provide – Adequate choices for the farmer to sell the product at an attractive price, barrier-free interstate trade , a framework for electronic commerce in agricultural products. In addition to these two measures, the government has announced that it will create a legal framework that will allow farmers to engage transparently with processors and aggregators, large retailers and exporters.

On Tuesday, Prime Minister Modi announced an economic package of Rs 20 lakh crore – including the previous monetary package and the liquidity measures announced by the RBI to date (amounting to 10.26 lakh crore) for revive the growth of the Indian economy. He also said the lockdown will be extended after May 18, but restrictions will be relaxed. Currently, India’s COVID-19 tally stands at 81,970, with 27,920 recoveries and 2,649 deaths.