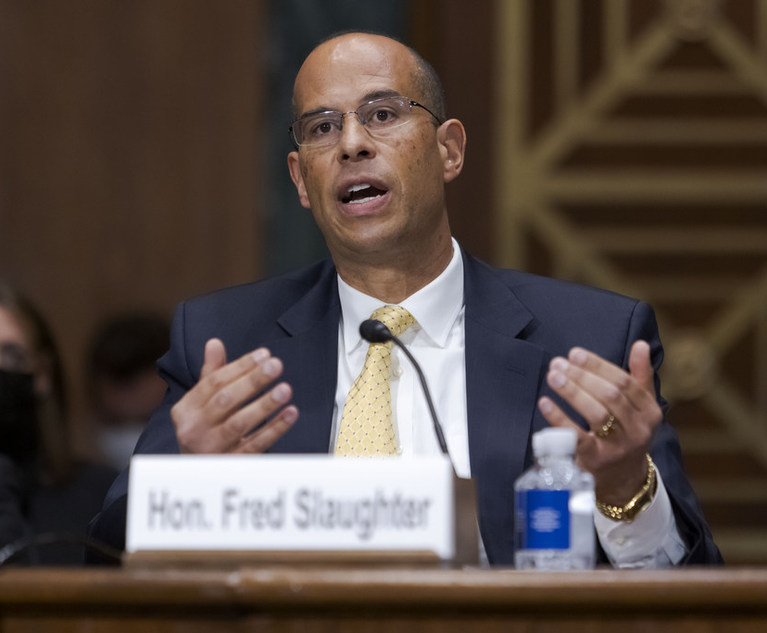 A new judge joined the Central District of California on Thursday while another candidate was nominated by the US Senate Judiciary Committee.

Frimpong’s chambers will be at the US First Street Courthouse in Los Angeles, while Slaughter, if confirmed, will likely sit at the Central District South Division Courthouse in Santa Ana, which currently has four judges and has not had a new one for 12 years. He would be the first black federal judge in Orange County history.

Frimpong’s swearing-in followed a 46-24 vote by the U.S. Senate in a marathon session that lasted until the early hours of Dec. Senator Chuck Schumer, for several of the candidates, allowing them to move forward. without debate. He has yet to invoke it for the other nominees: the Judiciary Committee held a hearing for Slaughter on January 12, less than a month after his nomination.

Frimpong joins the bench amid a massive backlog caused by both COVID-19 restrictions but also long-standing court shortages. In Santa Ana, U.S. District Judge Josephine Staton has no civil court dates available until the week of July 1, and his website includes a notice that the closing dates are not due to the pandemic.

“Rather, the congestion in the court schedule is due to the increased workload occasioned by the large number of judicial vacancies in the Central District of California,” according to the notice, which refers attorneys to the Judicial Council’s report. of the Ninth Circuit over the Central District Judge. emergency shortage.

Similar emergencies have been declared in California’s other three federal judicial districts. The Eastern District of Fresno recently welcomed Jennifer Thurston to the bench after 12 years as a magistrate. The Senate approved Thurston the same night as Frimpong, along with Jinsook Ohta, a former San Diego County Superior Court judge, and Linda Lopez, a U.S. magistrate, in the Southern District. Ohta and Lopez are now hearing cases in courtrooms at the Edward J. Schwartz U.S. Courthouse in San Diego.

The committee did not say who could vote next, but Kato and Sykes were the first and only to have hearings since Slaughter.

Slaughter wasn’t asked many questions during his January 12 hearing, but he responded to one from Republican Senator John Kennedy of Louisiana, who preceded him, saying, “I see you’ve talked a lot of diversity, which I Support.”

“Is the California Superior Court, in your opinion, systematically racist? Kennedy asked.

Slaughter, who currently sits on the civil panel at the North Justice Center in Fullerton, replied, “That’s a question I think for policy makers. And as a sitting judge, any case that might be a pending or pending case, I can’t answer that. »

Kennedy interrupted, “Let me arrest you, judge, because I’ve heard that song before,” and said he wasn’t interested in specific cases and again asked if the court was consistently racist. .

“As a sitting judge, I can’t prejudge issues and that’s the type of issue that could come before me as a judge,” Slaughter said. “But I can tell you the type of methodology I would use.”

Kennedy said Slaughter wasn’t going to answer the question, then asked him, “Do you think America is pretty good or pretty bad?”

” Pretty good. I’m very proud to be in the greatest country,” Slaughter replied. Kennedy was one of seven committee members who voted against Slaughter’s nomination Thursday.

Illinois Democratic Sen. Dick Durbin, chairman of the committee, asked Slaughter about his work as presiding judge of the Juvenile Rehabilitation Court, which includes individual assessments and guided services, as well as court by the peers that allowed other groups of students to recommend sentencing solutions to a judge. .

“Very proud to have worked on these programs,” Slaughter said.

“Interesting,” Durbin said. Durbin referenced youth gang violence in Chicago and said he was “happy to see a new approach” to juvenile justice.

Slaughter, 48, earned his law degree and bachelor’s degree at UCLA, where his father, Fred L. Slaughter, was a star basketball player during the 1964 national championship season and later served as assistant dean of law School.

He was nominated to fill the seat vacated by retired U.S. District Judge Andrew Guilford, who also earned his bachelor’s and law degrees from UCLA and was briefed on his admission to UCLA Law School. a letter from April 1972 signed by Slaughter’s father. Ties to the Bruins run even deeper: Guilford occupied the Santa Ana courtroom vacated in 2004 by retired U.S. District Judge Gary Taylor, who is also a two-time UCLA graduate.