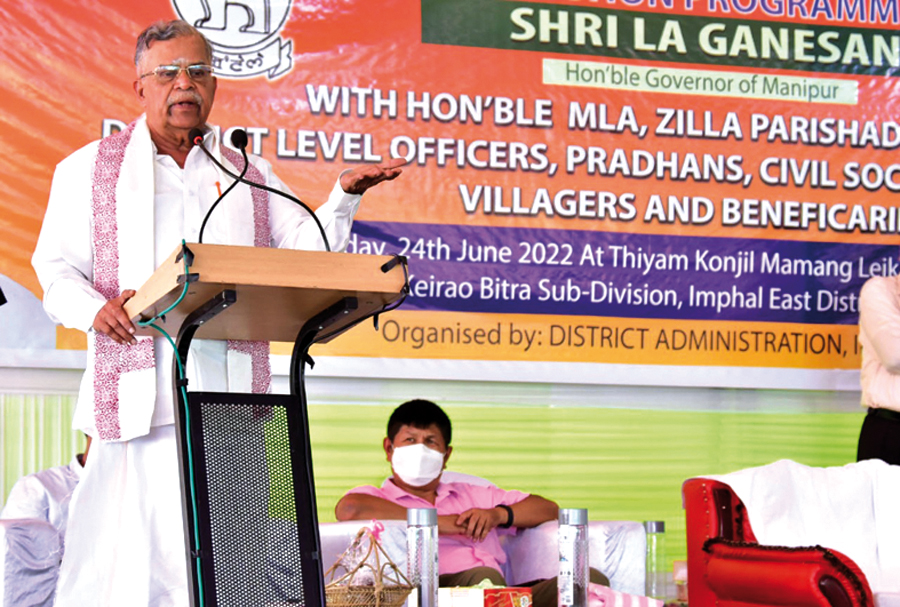 Imphal, June 24 (EMN): La Ganesan, Governor of Manipur, has appealed to people to enroll in various schemes run by the center and the state to reap the benefits.

Stating that the center and state governments have put in place a number of social welfare schemes and programs to benefit the needy people, he said, “With the aim of developing India on all fronts under under the leadership of Prime Minister Narendra Modi, developmental programs in many sectors, including housing, health, education and infrastructure, are underway in the country”.

To provide drinking water to all households in the country, Jal Shakti Abhiyan was set up.

Stating that there have also been a number of initiatives in the state, the Governor informed that with the maximum efforts made by the government, the COVID infection has come down almost to a negligible rate and called on the people to be vaccinated at least twice to fight against the pandemic.

Reiterating the centres’ commitment to eradicate Tuberculosis (TB) from India by 2025, the Governor directed the district administration to take steps to conduct door-to-door survey and identify TB patients so that prompt action can be taken.

Earlier, representatives of various civil society organizations expressed their concerns on various issues such as road connectivity, electricity, health, education, etc., in addition to urging the governor to take the necessary measures.

He also assured them that he will ask the Chief Minister to take all possible measures at the earliest in the best interests of the people of the region.