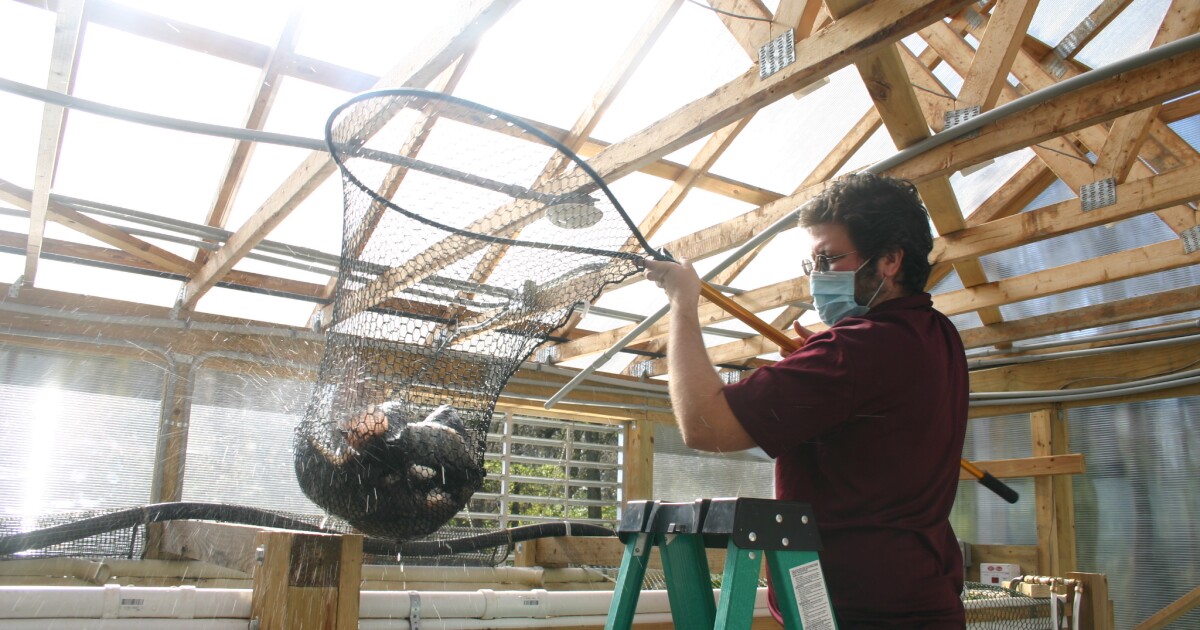 Extension of Central State University held a field day this past weekend to showcase their demo aquaponics setup.

Aquaponics combines the raising of aquatic animals with the cultivation of hydroponic plants, plants raised without soil. In a traditional hydroponic system, nutrients are injected into the plants.

However, aquaponics is considered a closed loop system. The idea is that as long as you keep adding fish food, the fish waste will feed the plants. The water supply is also constantly filtered and then recycled through the system.

The demonstration facility has a 1,000 gallon aquarium that holds approximately 200 tilapias. The tank stays at around 70 degrees and has air stones that keep the water oxygenated.

The aquarium water rotates through a waste settling basin. The fish waste settles to the bottom and the nutrient water continues through pipes to feed the plants.

Some of the water goes into “beds” eight inches deep where it feeds the roots of leafy plants floating on its surface. This technique is called deep water culture system.

The demonstration facility also has fruit plants growing from what is called a Dutch bucket system. One of Central State’s natural resource educators, Marc Amante, explained:

“Water flows from a pipe into a bucket. The bucket contains the medium and the plant.” He said, “There are holes in the bottom. The water flows into a reservoir which then flows through the rest of the system.”

Amante says that the roots of larger fruiting plants like to cling to the soilless medium. Central State uses pH-neutral clay granules in its facilities.

Jordan Harris is a student worker at the facility. He is a junior from Xenia who studies industrial technology. He said he saw aquaponics as a potential career.

“I want to open something as big, if not bigger than this facility here. You have plants and everything that just grows from fish shit. It’s just a self-sufficient complete system.” He said, “Nothing you really have to keep putting aside from fish food. I would love to do something like this. It really would be a dream.

It’s the first year of the system, and there have been a few bumps along the way. A few fish have died due to a power outage and over the past few weeks there has been an infestation of aphids. Still, the project is going so well that visitors have been able to take home fruit plants like jalapeños and cucumbers from the Dutch bucket system and lettuce from the deep grow beds in the aquaponic greenhouse.

It was also time to harvest the fish that had been living in the greenhouse since April, so those who brought coolers received farm-fresh tilapia.

Environmental journalist Chris Welter is a member of the body with Report for Americaa national service program that places journalists in local newsrooms.