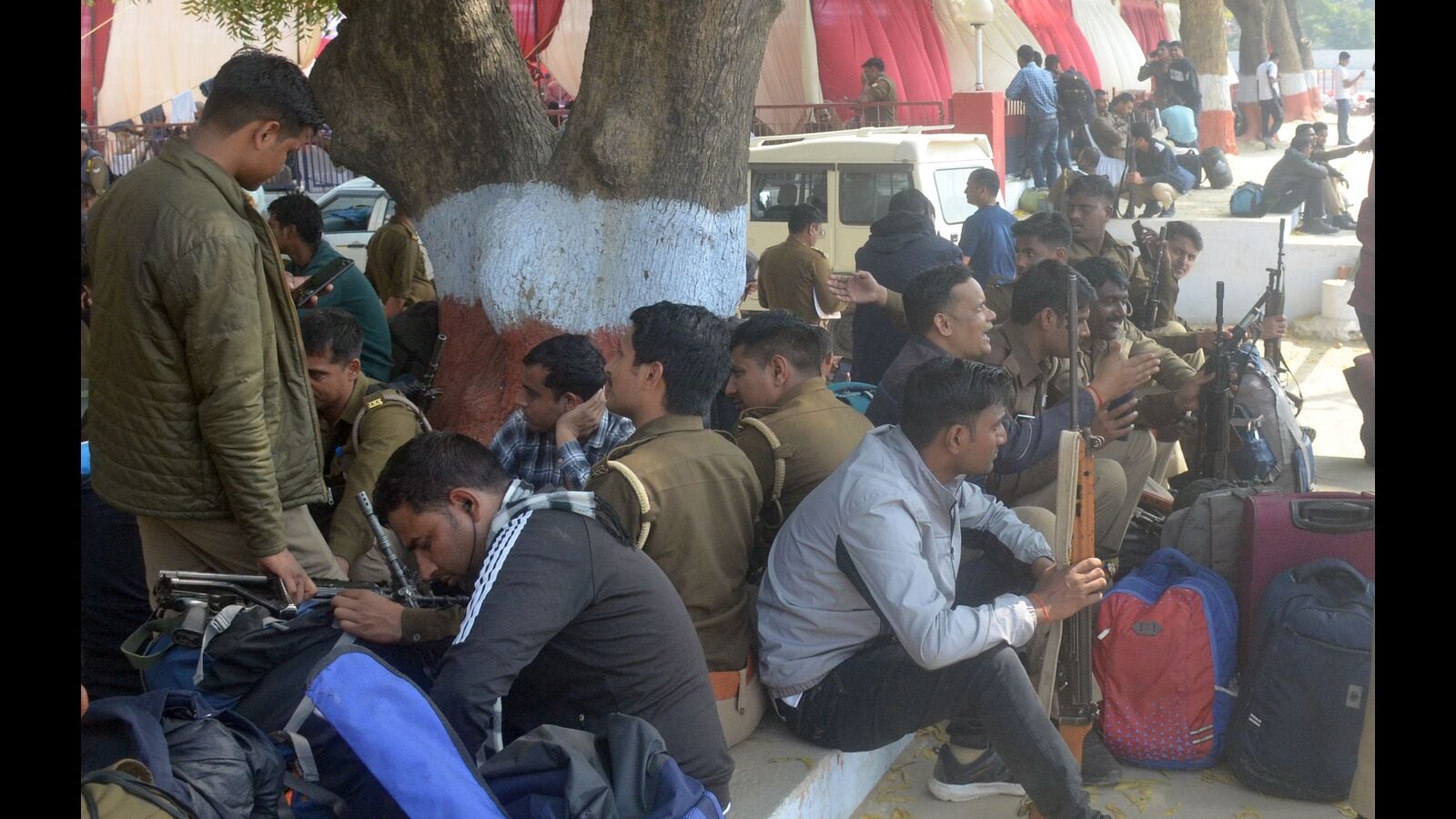 A massive contingent of paramilitary forces, comprising of BSF, ITBP and CRPF, equipped with sophisticated weaponry, has been deployed in three districts of Prayagraj region (Prayagraj, Kaushambi and Pratapgarh) heading to the polls in the fifth phase on Sunday.

In addition, the police carry out regular inspections at sensitive polling stations to ensure a fair and free poll on February 27.

“Online monitoring of the polls will be carried out and no one will be allowed to take mobile phones inside the voting booths. In addition to the paramilitaries, PAC and police personnel will be deployed to polling booths at sector and zone levels. Area ADG Prem Prakash, IG Rakesh Singh, DM Sanjay Khatri and SSP Ajay Kumar briefed the cops and listed their duties to them,” a senior police official said.

The official said security in the voting booths would be at seven levels.

“At the first level, Central Paramilitary Force personnel will be deployed in stands. The security of the polling booths and voting centers will be ensured by paramilitaries while teams formed at sector and zone level will be deployed on two levels. The inspectors will lead the team at the zone level while the team formed at the sector level will be led by sub-inspectors. Circle and SDM Officers will lead the constituted team at the fourth level which will be active in the voting centers and voting booths under their circles,” the official said.

The teams formed under the ASP and ADM level cadres will be constantly on the move in the urban and rural areas of trans-Yamuna and trans-Ganga.

“At the sixth level, the DM and SSP will keep a strict eye on the ballot while at the seventh level, the mobile teams under the SHOs of each zone will be on the move to ensure a peaceful ballot process and law and order. under their jurisdictions,” the official added.

The police have also set up QRTs or Quick Response Teams in the range which will give an immediate response in the event of an emergency. In Prayagraj, 24 QRTs will be on the move and two of them have been deployed for each assembly constituency.

In addition, flying teams and static surveillance teams will be active to keep an eye out for violation of the model code of conduct, objectionable material and people who may stir up trouble. These teams will be on the move to control vehicles and the contraband of money, drugs, etc.

“Four paramilitary personnel will be deployed to normal voting centers,” he added.

Strict security arrangements will be in place in Rampur Khas, Kunda and Patti constituencies in Pratapgarh, which have been identified as sensitive. Not only in the voting centers, but paramilitaries will be deployed in the neighboring areas of these three constituencies.

100 paramilitary companies, 32 PAC companies and 12,000 police were deployed in polling centers and polling booths in the district. 41 checkpoints have been installed and static magistrates will be in service at 21 barriers.

During this time, 46 companies of paramilitaries, 2 platoons as well as an additional company of PAC, 380 sub-inspectors and 3400 gendarmes were deployed in Kaushambi.

“Central police personnel have already been deployed to voting centers. The staff will analyze the security arrangements and will have received a list of possible troublemakers and other details about this area. Information from the polling center will help them endure a peaceful vote. The Election Commission considered Prayagraj to be hypersensitive while Pratapgarh was sensitive. Kaushambi and Chitrakoot are normal. Forces have been deployed as required,” Prakash said.

In accordance with EC guidelines, security personnel should mark a 200m mark below which no ballots or desks should be distributed. No mobile, armed or private guard will be allowed within 100 meters of the voting booths. Only authorized voting staff were allowed to carry cellphones inside the voting booths. Photography during voting, selfies or broadcasting audio or video from voting booths and voting centers has been restricted. No security personnel will accept food or any other items from candidates or their supporters. People in the vulnerable category and anti-social elements should not act as voting agents, the ADG added.