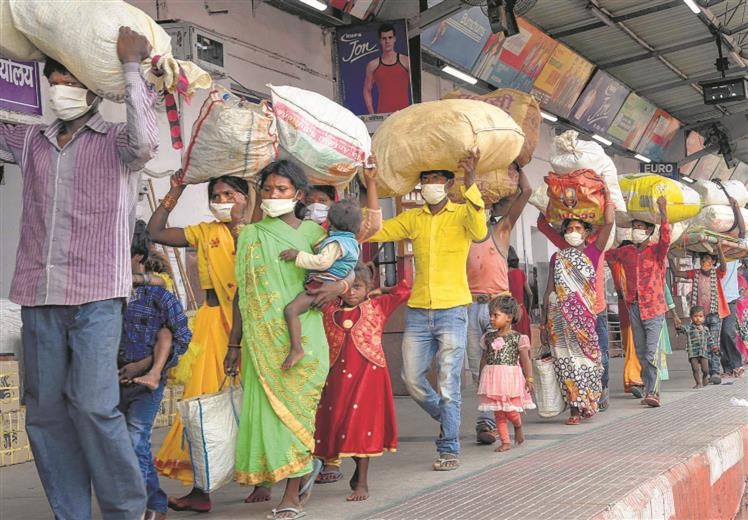 By Harsh Mander, Anjali Bhardwaj, Jagdeep Chhokar*
On January 18, 2022, a petition was filed in the Supreme Court (SC) regarding the central and state governments’ failure to comply with the guidelines given in the suo motu migrant workers case.

The SC in its judgment of 29 June 2021 in the case of migrant workers (Suo Motu Writ Petition (Civil) No. 6 of 2020, ‘In Re: Problems And Miseries Of Migrant Labourers’) had given several important directives to ensure the food and social security for migrant workers, including:

However, the central government and most state governments have failed to implement and operationalize these guidelines.
The non-compliance is all the more worrying as the country is once again facing a growing number of Covid cases and nearly all states have implemented lockdowns, restrictions and curfews, exacerbating the distress. economic and hardship of migrant workers, most of whom are in the informal sector and therefore have no social or financial safety net to fall back on.
They are once again faced with the loss of their livelihoods, uncertainty and hunger.
The petition relies on information accessible under the Right to Information Act (RTI) and governments’ responses to legal notices sent regarding the implementation of instructions to highlight the violation of the SC stop. On the issue of increasing coverage under the public distribution system, it is pointed out that the central government has so far not launched any exercise to redefine the coverage.
In response to an RTI inquiring about action taken following the SC shutdown, the central government said: ‘Any revisions to state/UT coverage will be possible after the release of the next census data. The judgment rendered by the Honorable Supreme Court is currently under review”.
According to government information and press releases, it has been confirmed that the 2021 census has been delayed due to Covid and data is unlikely to be released in the next two or three years.
The government’s failure to initiate the re-determination of coverage is in clear violation of SC guidelines which were in the context of the pandemic and the suffering caused due to food security exclusion and therefore required urgent action. and limited in time.
Following the June 29, 2021 shutdown, legal notices were sent to all states to ensure timely compliance with CS directives, including the directive to state governments to establish a system for the provision of dry rations to migrant workers who do not. not have ration cards.

Only five states responded to the legal notices, of which only the states of Odisha, Delhi and Assam provided details of the scheme formulated by them. In addition, a request has been made under the RTI Act to the central government for details of which states have requested additional food grains to be given to migrant workers and whether the central government has provided the grains.
The response revealed that as of September 2021, only two state governments i.e. Telangana and Meghalaya were seeking additional food grains to provide rations to migrant workers and even this was not provided by the central government.
Therefore, it appears that most states and the Center are not complying with SC guidelines in terms of providing rations to migrant workers.
The petition notes that the central government is well aware of the plight and has therefore extended Pradhan Mantri Garib Kalyan Ann Yojana (PMGKAY) until March 2022, knowing that 80 million people who have ration cards are entitled to receive 5 kg of additional rations (over and above the five kg per person entitlement). However, no provision has been made for equally poor and vulnerable families who do not have ration cards.
The petition calls for the immediate implementation of the guidelines contained in the June 29, 2021 judgment and for central and state governments to file reports on the status of implementation.
The petition was mentioned by Barrister Prashant Bhushan before the Bench of the Chief Justice of India (CJI) on January 19, 2022 for listing the case and the CJI indicated that it would look into it.
—
*Interveners in suo motu (civil) application 6/2020. A copy of the petition is available here
central governmentcentral statestate governmentssupreme court
Share FacebookTwitterGoogle+ReddItWhatsAppPinterestEmail