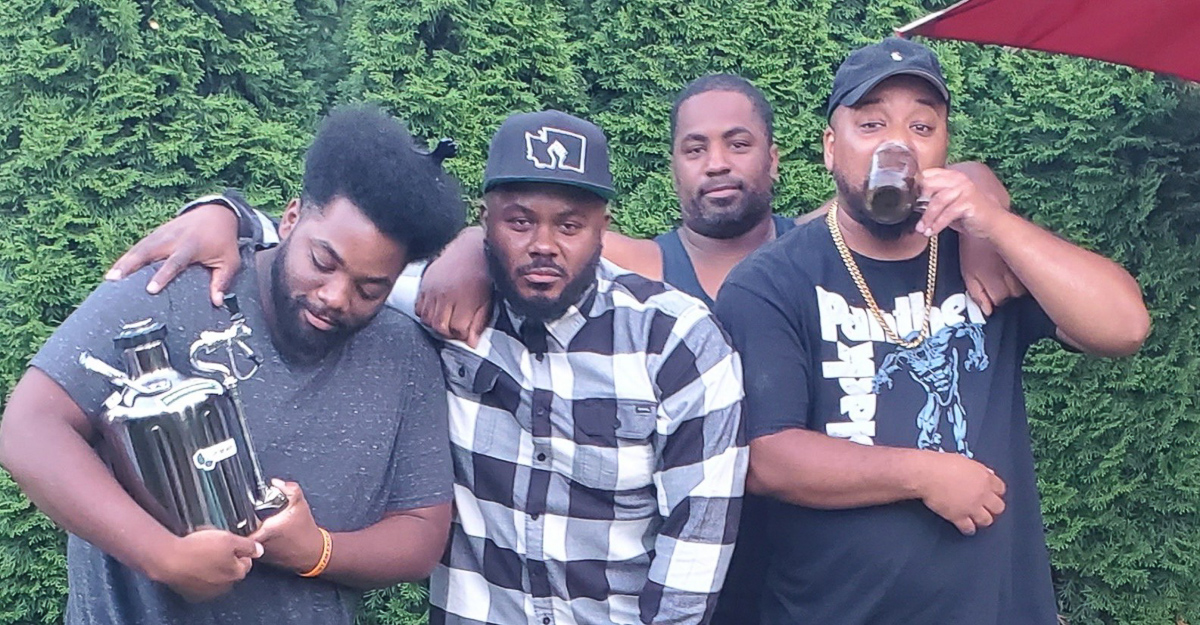 As the students walked past their new establishment, which was due to open this summer, brothers David and James Dixon told me about their passion for beer and how it became a family business.

Brothers David, James, Matt Dixon and Mario Savage grew up walking around the Central District to and from school, sports and summer activities. The four brothers, co-owners of the new brewery, are from the Central District. On one such walk home after playing basketball in the late 2000s, the brothers saw two neighborhood men brewing beer. They say seeing these guys brewing beer changed the beer-making process in their minds from a kind of “space-age technology” to an authentic experience.

“I think we both took it from those times and seeing those guys, they were having fun. They were always having fun brewing beer,” David said.

This experience planted the seed when they were still boys, once nicknamed the “Basement Brothers” because their home, located at 23 and Charles, had a large basement for them and their friends to congregate. In the basement, they did their homework together, hung out and enjoyed each other’s company in a place where everyone was welcome. David says there was only one rule in the basement: “Respect everyone in the building, respect the space, learn from each other and grow.”

Transitioning from boys to men, the Basement Brothers grew and built a family in the Central District that also extended into the wider community. However, it wasn’t until 2017 that they returned to beer. James’ wife bought him a brewing kit for his birthday because he had always wanted to try brewing beer like those guys he saw in his youth. The same year, he announced that he would be moving to Texas. And brewing his first batch of beer with his brothers was one of the last things he did before the move.

This first batch of beer was decent, although the brothers laughed as they shared that the next batch was “trash”. But brewing started to be a way for them to keep in touch as they lived in different places. So they decided to create their own community of brewers – only four of them brewed beer and shared ideas. “I probably brewed close to 20 batches in the span of four months,” James said. “And [my brothers] also did the same. And we kind of did it all and started spending our money on beer gear.

They held their first tasting this winter of 2019, when James flew in from Texas to share their newfound love of brewing with the community that raised them. At that time, they were brewing three different beers: a marshmallow stout, a peach-pepper serrano beer, and the basement stout, which became one of their signature beers.

This first tasting with friends and family went so well that they continued to have more. “People started asking for it and really wanting it, and not only were they giving us great feedback at these tastings, but they also wanted to take it home. Call and see when they can get it, ask, “Are you bottling beer this week?” or, ‘When can I fill a growler?’” David said.

This outpouring of support boosted their confidence and encouraged them to try different styles of beer. Eventually, they decided to make the Central District the home of their new zeal for brewing and make it a business in the place where they first saw the bonds that can be made around beer.

What does 23rd Avenue mean to you? This is the question the brothers want to ask. This is also the slogan they developed for their brewery, named after a street that meant so much to them. They had several possible names for the brewery. They say most people assumed they would be called “The Basement” after where they spent so much time as kids.

But with the brewery opening in their community, they wanted their presence in the neighborhood to be one that embraced the area’s rich history. James shares that there is another brewery down the street, which used to be a hair salon he used to go to called Royal Image. He also talks about how the Central District was once the number one jazz capital on the West Coast. “There’s almost no knowledge of it, there’s no depiction of it, there’s no documentation of what actually happened, and I think with gentrification one plans for this is to erase what was there before and change everything without acknowledging the community that is still here, never gone.

For the brothers, 23rd Avenue is synonymous with community, family and progress. “It means creating wealth within your core at the core of who you are, as opposed to money. When you’re strong on the inside, then you’re unstoppable. So that’s the magic we want to bring back to the stage,” David said.

The brothers told me about their love of beer, community, and Seattle summers spent walking streets like 23rd Avenue. Experiences that inspired the beer they make now, like their Black Gold, which is a blackberry beer reminiscent of when they picked blackberries as kids.

As we were talking, kids walking home from school walked past the open door of 23rd Ave Brewery and a fight broke out. Hearing the commotion, the brothers quickly came out to see what was going on, break up the altercation, and make sure everyone was okay. They talked with the children about respect as they learned while growing up. When they came back inside, James said: ‘This is our community, we are part of this community, we deserve to be here and we want to make sure it’s safe for children walking in the street just after leaving school. Who would check them if I didn’t? »

The brothers grew up in a basement in the Central District and wandered around the neighborhood that has always called them home. “A lot of people from the community were coming just to hang out. So we try to make beers that represent what the CD was with what the CD is, and what we hope the CD will become,” James said. They want to create that basement feeling – the love they have for their neighborhood and the fun they get from making beer.

The Basement Brothers, David Dixon, James Dixon, Matt Dixon and Mario Savage, will celebrate the opening of their new brewery, 23rd Ave Brewery Bottle Shop, on Saturday, June 18, from 3-7 p.m. They encourage everyone in the community to come and check out the new brewery and bottle shop.

The range of beers will include:

The stout basement: named after the basement the boys grew up in, it’s their signature beer – a full-bodied, rich stout

Well Patheresa is a queer poet, writer, and storyteller who lives in SeaTac, Washington. Born to a black mother and a Persian father, her experiences as a multicultural child shaped her desire to defend and amplify her community. She is currently attending Highline College in Des Moines. Follow her on Twitter @PatheresaWells.

📸 The featured image: Brothers (left to right) James Dixon, David Dixon, Matt Dixon and Mario Savage have roots in the Central District where they are opening their new bottle shop at 23rd and Jackson. Photo courtesy of 23rd Ave Brewery.