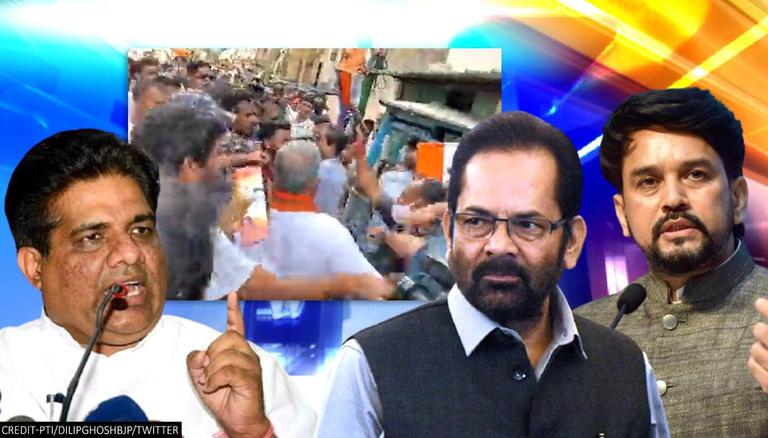 Ahead of Bhabanipur bypoll in West Bengal, a BJP delegation including Union Ministers Bhupender Yadav, Mukhtar Abbas Naqvi, Anurag Thakur and party leader Om Pathak will meet with the Election Commission of India (ECI) on Tuesday. There are reports that the leaders are expected to meet with the ECI around 12:30 p.m. regarding the clashes that erupted on Monday.

Vice-president of the BJP Dilip Gosh had alleged that there had been a plot to assassinate him. The meeting between the BJP delegation and the ECI will take place in the national capital. In addition to the Union ministers, the head of the BJP of West Bengal, Sukanta Majumdar and Dilip Ghosh, will also meet with the ECI.

On the last day of Monday’s campaign, BJP vice president Dilip Ghosh was gheraoed and attacked by TMC supporters as he attempted to enter Bhabanipur. On the other hand, TMC accused Dilip Ghosh of the BJP of threatening residents as Ghosh security personnel were seen showing their gun to the crowd. Dilip Ghosh shared a video clip of the incident and accused Mamata Banerjee’s TMC of sending thugs to attack Dilip Ghosh and his supporters in Bhabanipur. The visuals show a crowd gheraoing the leader, pushing him and yelling at him, denying him entry into the area.

1.1 How safe is the life of the common man in this state when the public official is attacked in Bhabanipur, the territory of Madam Chief Minister? pic.twitter.com/bgU2DLqEiu

However, the TMC denied the claims and instead accused the BJP of threatening protesters as one of Ghosh’s security members brandished his gun at the crowd that had harassed the leader.

“How DARE a gun at the public in broad daylight? Aren’t people allowed to protest leaders they don’t support?” Tweeted the TMC.

The EC has announced that it will hold side polls only in Bhabanipur on September 30, at the special request of the state government. In addition, he will also hold polls in Samserganj and Jangipur in Bengal and Pipli in Odisha where the polls were postponed due to the deaths of running candidates in May. Bhabanipur – which is the constituency of Mamata Banerjee – is currently vacant since MP Sovandeb Chatterjee resigned after winning the seat. As Banerjee had lost her electoral battle against Nandigram, defeated by Suvendu Adhikari of the BJP, she must be re-elected by November 5 to remain CM of West Bengal. The results will be announced on October 3.